William Adkins Inspires Others to Make a Difference

Over the last few months, William Adkins, an 11 year old boy from Tucson, Arizona has been an advocate for change. Once William learned about malnutrition and the severe consequences it has in the lives of millions of children around the globe, his natural instinct was to help in any way he possibly could. When asked about how he felt about malnutrition, William said, “I don’t think children, or anyone should starve to death… it’s a challenge that we all need to rise up and face.” 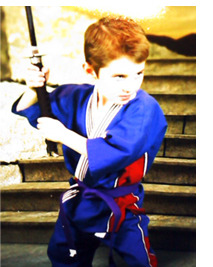 William has already talked with handfuls of people, including kids from his school and even his school board, asking them to take action and help children suffering from malnutrition get the nutrients their bodes are starving for. The school Principal is currently working to get permission for William to speak in an assembly to his classmates and hundreds of other kids attending the school. William’s mother said, “When he told his friends at school about how saving a child from malnutrition cost less than the price of a toy, parents started to call me!” She went on to say, “One mother stated point blank, ‘Well, you know you’re signing us up for this, right?’”

Perhaps his biggest idea in creating the change children need is a joint effort with martial artists around the world. William has been involved in the martial arts most of his life and knows first hand the passion and dedication it takes to become a great athlete. Using those same concepts, William says he’s dedicated to ending malnutrition for every child in need. He’s devised a plan to bring martial artists together to compete in a competition that will benefit children suffering from malnutrition. William calls the competition a “Break-A-Thon” and is working to recruit Champion board breakers to participate. Eventually, William says he wants to have the fundraising Break-A-Thon televised!

For Christmas, William has decided to give up presents and is asking friends and family to give $5 a month so children can receive proper nutrition instead. He’s already got an outlook on next year, too, saving his own money to go to Romania and Mexico with MannaRelief to help deliver nutrient support children in need. William says he’s “already learned how easy it is to make a difference” and “anyone, any age, anywhere they are can make a difference if they put their mind to it.”

We whole-heartedly believe that it is passionate kids like William that will bring about change in this world that some of us could have never imagined. William’s right, anyone can make a difference. It makes us proud to see kids like him taking a stand in what they believe in and giving it all they’ve got to help other kids less fortunate. He is well on his way to being a great leader and a major advocate for change.